So, anyone who has talked to me in the last two months or so knows I have been obsessed with this movie since I saw it when it came out. I’ve seen it five times. The last time being on Father’s Day with my parents and youngest sisters. I know there has been negative commentary about it and that’s fine, I don’t care, I think it’s crazy, but I LOVE THIS MOVIE.

There are mild spoilers ahead so if you haven’t seen the movie yet then I would exercise caution in reading this piece. You can read my Movie Review: Aladdin.

Anyway, the film ends with a great open ending in terms of the story. Yes, Aladdin and Jasmine marry, and Genie and Dalia go off and have kids which is beautiful.

Side Note: I have to say, I thought the romance between Genie and Dalia was cute, innocent and pure. I’ve seen people (mostly on Tumblr) say that it’s a “forced relationship” among other words and I completely disagree. I thought Genie and Dalia were sweet and awkward and Will Smith and Nasim Pedrad had nice chemistry. I mean, why shouldn’t Jasmine’s best friend and Aladdin’s best friend have some interest in each other? Neither one of them gets out that much and plus, the way that Aladdin and Jasmine supports the romance between Dalia and Genie is super cute.

It’s been a while since I’ve seen Return of Jafar, it’s the lesser of the two sequels I think, but it would make for a great live action sequel. At the end of this Aladdin (and in the animation) they get Jafar to turn himself into a Genie and he gets trapped in a lamp. Our Genie tosses him back into the Cave of Wonders. Now here is where things would pick up. It’s been a year since they defeated him. Aladdin and Jasmine are married, she is Sultana and doing a bang-up job at it and Aladdin is at her side as King, or Sultan or whatever his title would be. But I would imagine he’s a little restless considering his life of movement before.

But, I don’t necessarily want to follow the exact plot of the animated film. But somehow Jafar needs to be freed from the lamp. In the animated film, a different kind of thief comes across the lamp after Iago somehow manages to get himself and the lamp out of the cave and leaves the lamp in a well after being sick of Jafar’s bossiness. Now, I’ve never really liked Iago like that so he doesn’t have to have such a large role that he has in the animated sequel, but unless the Cave of Wonders resets itself every time someone failed to get inside or someone failed to get the lamp, or even that the Cave’s purpose is over since the lamp was already taken then it could just be a pile of rubble and our Genie’s magic never actually made it through whatever rubble the cave is in now, which would allow for some thief to get it, it was Abis Mal in the animated, we can keep him I guess but make him more competent. That was a run-on sentence, I know. OR, since it’s Jafar’s lamp now and he’s a terrible person, perhaps the Cave’s magic doesn’t work the same since this Genie is a massive jerk?

But regardless, I want to see Jafar get his revenge and I want to see him win for longer than a few hours. He threatened Aladdin before he got sucked into the lamp, so I would imagine he would be pissed and go after the princess who thwarted and defied him and the street thief who made him look like a fool. BRING IT ON. I might just write this sequel lol.

So, obviously we need to explore Aladdin’s history, his parents and all that. In the movie he says he lost both of his parents when he was young, but I don’t think he ever said how. Perhaps his mother died but he’s not sure what happened to his father, so he just assumes he’s dead… WHICH HE ISN’T!! He’s the King of Thieves… Cassim, hot dad lol. Choose a brown actor and make sure he at least resembles Mena Massoud because I’ll forever be mad at Stellan Skarsgard’s casting as Orlando Bloom’s father in the POTC movies. They kept saying Will was Bill’s spitting image and they looked NOTHING ALIKE. Anyway, I would love to explore how Aladdin and his father are so similar and any other shenanigans. They don’t have to be looking for the Hand of Midas or pull exactly from the animated film, but I think it would be great to see Aladdin have a whole person enter his life who is into some dark and bad stuff. It would be a different kind of personal story since it’s his father and he never really knew what happened to the man. Oh, that would be so great!

Let’s see some other countries in this world. We can go to Shirabad sure, but I’m thinking more along the line of, Jasmine and Aladdin visit another country on the Silk Road for something and perhaps the royal family, a rival young King maybe, is a super jerk? Or perhaps another kingdom wants to invade Agrabah and/or conquer all the desert kingdoms… let’s go to war! This is the lesser of my ideas.

I wouldn’t mind having a romcom like film with Aladdin and Jasmine getting used to married life and all the shenanigans that happens with that, like what is Aladdin’s actual title now? I really like the idea of him having a difficult time being in a ruler, especially since he’s made a name for himself as a thief. I would assume the guards who were on Jafar’s side were punished so none of them would be a problem exactly, but maybe some people in the kingdom? I don’t know but I would be interested in seeing how they handle being married. It seemed like Genie and Dalia were returning to Agrabah at the beginning of the film, so are they there to stay? They already have kids and stuff, so Aladdin and Jasmine must have been married for a while or there is some pocket of magic that allowed time to move differently for Dalia and the Genie?? Let me just also say, I think Will Smith’s Genie should also retain some of his magic. Maybe not like phenomenal cosmic powers but some of it should be left if he’s had magic for 10,000 years. It can’t just be gone. Anyway, let’s get it.

Do y’all remember him from the animated show? 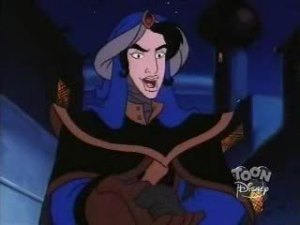 He’s a dark sorcerer, similar in ways to Jafar and I would quite enjoy seeing him on the big screen. So, I know he’s really pale because of where he lives, but just hire a light skinned POC as it’s not an excuse to cast a non POC actor. Anyways, he and Aladdin often butted heads and I remember reading that they wanted to introduce him as Aladdin’s older brother he didn’t know about in the third movie, but they decided to explore Aladdin’s dad instead. Now, I’m not against the idea of him being Aladdin’s older brother, perhaps from another woman, but we’ve seen that many times, so I would rather that not be the case. I’m even hesitant on him being a friend Aladdin knew from the city. Sooo, perhaps he was “friends” with Jafar, perhaps he knew Jafar from Shirabad since Jafar is clearly from Shirabad and not Agrabah.

There are a few episodes in the show that have good plots they could adapt. “Two to Tangle” is about Mozenrath dying because of his dark magic gauntlet or whatever, so he wants to transfer his body into a younger, stronger, healthier one and he chooses Aladdin. That could be interesting. There are a few others but this one is a little less cheesy lol.

This is My Thoughts on an Aladdin sequel with my Top Five ideas. I really think this movie deserves one, way more than Maleficent does, don’t even get me started on that, and there is a ton of material to pull from with the animated show, or even creating a new and interesting story. Plus, I want to visit this world again with Mena Massoud and Naomi Scott leading the charge. Shoot give me a television show on Disney Plus! Something!

Please feel free to comment, I love feedback. Let me know what you think of these ideas AND what would you like to see in a sequel. Tell me something good!